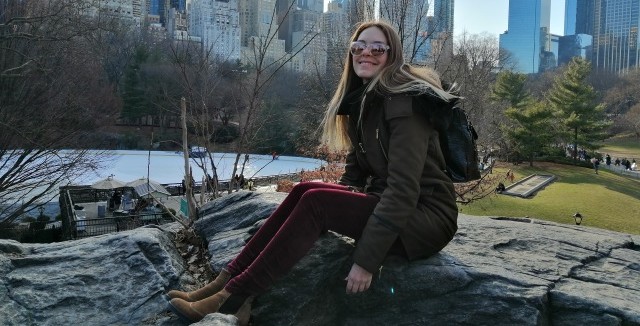 Digestive diseases, especially intestinal diseases, can generate in the patient feelings of shame, discomfort, social isolation and sometimes loss of will and/or fear of trying new things. One of these fears is travelling. Not for travelling per se – after all, who doesn’t like it, right? -, but due to the thousand and one uncomfortable circumstances one may encounter, such as:

– The type of travel transport (which can cause nausea, flatulence, etc);

– The fear of not finding accessible toilets in the tourist spots you visit;

– Or the insecurity of the local cuisine on offer (types of cuisine, ingredients they use, being able to distinguish ingredients in different languages, awkwardness of making special requests, etc).

For most people this is not even an issue. For me, for many years it wasn’t either. Until one day it started to be. (And let me make a parenthesis here: anyone can develop a gastrointestinal problem. There are no ages, genders, geographies or races that allow us to say that such a thing will never happen to you!).

I will share with you the difficulties I had travelling when having an active bowel disease became THE issue! (And the destinations I chose at that stage were superb: AMERICA and ITALY! Mamma Mia!)

Today I will tell you about my adventure in NEW YORK.

Now in the middle of an active disease, still without the care of a gastroenterologist, I had direct passage to New York in February 2020. At that time covid-19 was already being talked about, but we were not yet in a pandemic situation. Everything was a big movie, worthy of North America (it is worth mentioning that 5 days before the trip I had a colonoscopy and I still did not have the medication adjusted for my clinical situation).

First because I had severe symptoms like cramps, spasms, nausea, abdominal distension, etc, etc. Secondly because I had no S.O.S. medication or even adjusted medication, as there was still no correct diagnosis. Then because I was weighing 47 kg and already had some dietary deficiencies (as revealed by the results of the blood tests I received 1 day before the trip). And finally, because I was in the phase of testing the foods I could digest and the ones that caused me severe symptoms.

Let me make the caveat that it all started with a car accident (and if you read the previous blog post you already know this). It’s the typical story of one thing triggering another, which in turn intensified another thing that was already there. This is to say that the diagnosis of an intestinal disease (e.g. inflammatory bowel disease, irritable bowel syndrome, celiac disease, etc.) is not always crystal clear or black and white. They are often lengthy processes involving several tests, sometimes several health professionals, and in the middle of this process the patient continues to have symptoms, sometimes becomes disorientated, a lot of anxiety is generated and can even develop nutritional deficiencies. Of course, this does not happen in all cases, some may be quicker, others even slower than mine was.

But let’s get back to the American dream!

As you can understand, I had no reason to be anxious, right? Among many worries, the one that made me most insecure, without a doubt, was the food and how my body would react. My biggest fear was not being able to enjoy the trip of my dreams (yes, New York was THAT destination for me!) and spending most of the trip in a hotel room writhing in pain (or hours on end in the bathroom). Besides that fear I couldn’t only think about myself, since I wasn’t alone on the trip (there’s the social issue as I mentioned at the beginning). So how did you organise the trip, Sara? The right word is exactly that: organise! It was the first trip I’ve done in which I organized it from start to finish (and the case asked no less). And, to be clear, this pre-travel preparation is the minimum that can be done when you have a gastrointestinal disease, because you never know how your body will react to a new environment, to transportation, to the food in the country and even to the water you drink or to its climate. But, without a doubt, an organisation helps A LOT!

Oh Sara, it’s the “United States, come on”, everywhere you go you can eat… meat! Which for a vegetarian plus active bowel disease might not be the best option, right?

I did a lot of research on food, from restaurants in the various tourist spots, types of cuisine, what are the most used ingredients in certain dishes, etc., and I organized it according to the touristic route. Of course, in practice this organisation may not be followed. But doing it made me much more sure of the food I had on offer and my options.

To tell you that I had no symptoms during the trip would be a lie, but that this organization and pre-travel preparation allowed me to know New York the way I always dreamed of, that was true!

That’s why I created the Traveler Nutrition Consultation to help you with this organisation and preparation in terms of food, so that on your next trip this won’t be a problem. And I hope you can enjoy your trip the same way I enjoyed 8 WONDERFUL days in New York.

It’s reason to say that DREAM is worth it. Always!

Ps: Later on I will tell you about my “foodie” adventure in Italy.

We meet again here on the blog!

Low FODMAP Diet – What is the goal?